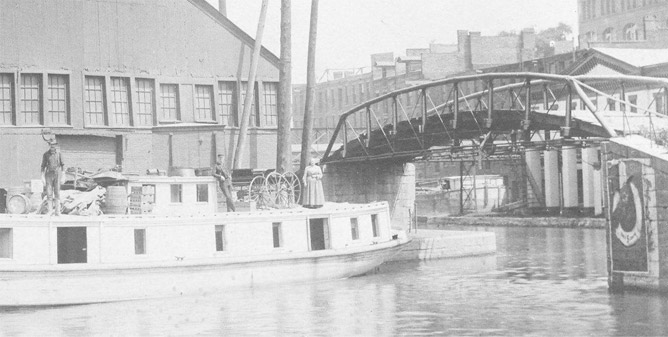 America followed Europe into the field of canal construction. Extensive European and English canal systems proved the feasibility of inland waterway transportation and provided fine examples to be improved upon. As the need for improved inland transportation became obvious for westward expansion and the states developed the financial stability for large construction programs, America plunged into an era of canal building activity.

From the days of the birchbark canoe, the early trade routes of the Northeast utilized New York’s waterways. The Lake Champlain-Hudson River Route and the Lake Ontario-Oswego River-Mohawk River Route were utilized by native Americans, fur traders, missionaries and colonizers. Fortification along the these routes still stands as testimony to their importance in exploration, trade and settlement.

The birchbark canoes were supplemented by bateaux, longer heavier boats rowed or pulled by several men, which by 1791 would haul a cargo of 1 1/2 – 2 tons. Bateaux grew in size, and so did the problems with their use. These natural waterways had several rapids and falls where they had to be unloaded and hauled past the rough water, refitted and sent on their way. They also had to fight currents, floods and low water. In march 1792 the Western Inland Lock and Navigation Company came into being and improved navigation on the Mohawk River. Also in that year, this company built small canals 3′ deep with locks of 12′ x 74′ around the falls and rapids of the river. By 1796 bateaux had grown into Durham boats with capacities of 15-20 tons. Although business was brisk, maintenance on the wooden locks and channels depleted revenue and the operation folded a few years later.

In 1817 the Erie Canal was established under the management of a New York State Commission. (Federal funds were sought, but were not legislated, so this canal and all subsequent canals in New York State were built and maintained exclusively with state funds.) The canal was dug from Albany to Buffalo, 4′ deep and 40′ wide, with stone locks 15′ x 90′. The locks were the limiting factor on boat size and their efficiency of operation dictated the allowable traffic flow. Additional canals were dug from the Hudson River to Lake Champlain, from Montezuma to Cayuga and Seneca Lakes and from Syracuse to Oswego. This canal system proved to be so successful that almost every community in the state lobbied for a link to the system. Conceding to many of these pressures, a network of canals was created of the same basic dimensions. These lateral canals proved to be of marginal value at best:

In 1836 an enlargement program commenced on the main Erie Canal system. The canal was straightened a bit, the channel was increased in size to 7′ x 70′, and the locks were enlarged to 18′ x 110′. This permitted boats of much greater size on the Erie, Champlain, Cayuga-Seneca and Oswego canals, and further diminished the importance of the smaller lateral canal.

The most uneconomical sections of the lateral canals began to close almost as soon as they were built. The production of smaller boats declined drastically but did survive on the open sections. Most of the lateral canals were closed by 1878 with only the Black River Canal lasting until the eventual close of the entire system in 1917.

The growth of steam power on the canal and steel boat construction eliminated the need for a waterway as protected as the Old Erie. A twentieth century canal of grand dimension with cast concrete structures and electronic controls was begun. The Barge Canal system, utilizing canalized rivers and lakes and enlarged sections of the Old Erie, opened in 1918. Today it continues to use several of the old routes, Champlain, Erie, Cayuga-Seneca and Oswego, and has been renamed the New York State Canal System.