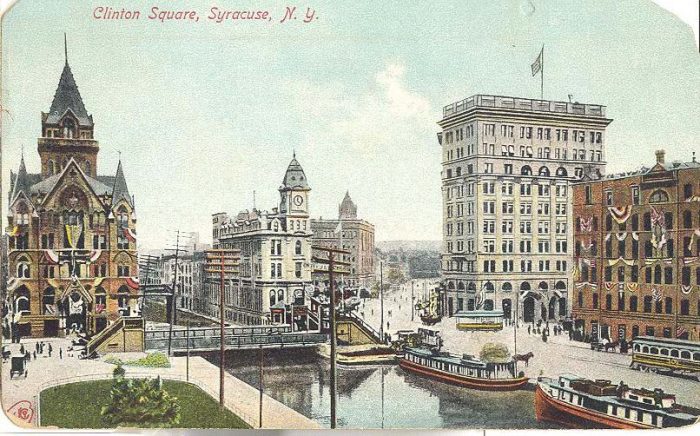 On April 20, 1820, the first packet boat traveled to Syracuse on the Erie Canal. In this article, Derrick Pratt shares the story of this momentous event.

The Village of Syracuse was incorporated on April 13, 1825, marking the official founding of what would eventually become the city we all know and love. However, it was five years earlier in 1820, when Syracuse truly began its rise from a swampy crossroads of 250 residents to one of the chief cities in New York State.

That was the year the Erie Canal opened for navigation along the Middle Section. 1820 would be a year of great excitement for the nebulous community of Syracuse, which also received its name that year. It would see the arrival of new boats, Governor DeWitt Clinton would visit twice, and a host of celebrations would herald the transformative effects this artificial waterway would have on the area. To understand the history of Syracuse and the effect the Erie Canal had on it, 1820 is a year that deserves special attention.

Navigation on the Erie Canal began in late 1819, when the packet boat The Chief Engineer of Rome made the Canal’s inaugural voyage from Rome to Utica. It was the following year, in 1820, that a packet boat first came to Syracuse. That boat was the Montezuma, designed and constructed by Comfort Tyler, an early settler of the area who had moved to Montezuma. The Montezuma was 76 feet long and 14 feet wide, with two cabins fitted out for passengers. It was launched on April 13, taking 70 passengers through the Montezuma lock.

A week later, on April 20, the Montezuma set off from its namesake port to Syracuse. Hundreds of people lined the banks of the Canal to witness the historic occasion. When the Montezuma failed to arrive at noon as scheduled, many of the onlookers began to proclaim that the boat had sunk and the Canal was doomed to failure, cursing DeWitt Clinton and other Canal backers in the process. The Montezuma had not sunk, however, and had instead been delayed in Jordan in order to hook up a team of swift horses. They entered Syracuse at a full trot around 2:00 PM, kicking up a wake that soaked many of the onlookers.

For the next two hours, the residents of Syracuse celebrated the arrival of the Montezuma. Then, about 100 members of the crowd boarded the boat to travel up the newly built side canal to Salina, which was at the time the principal settlement of the area. The celebration continued, with throngs of people walking on the towpath alongside the boat for the 22-minute trip up what would eventually become the Oswego Canal.

In Salina, a band greeted the Montezuma and led a procession from the boat to Beach’s Inn. Following what was undoubtedly a raucous celebration, 150 people, including the band, boarded the boat for the return trip to Syracuse.

Thus began canal boat travel in Syracuse. The Chief Engineer, which had recently been purchased by Comfort Tyler, arrived three days later, and with the Montezuma would begin regular service between the Seneca River and Utica. This was only the beginning of the exciting events that would make 1820 a year of note for Syracuse.

Hours of Operation During COVID