Aboard the Auburn and Syracuse Railroad 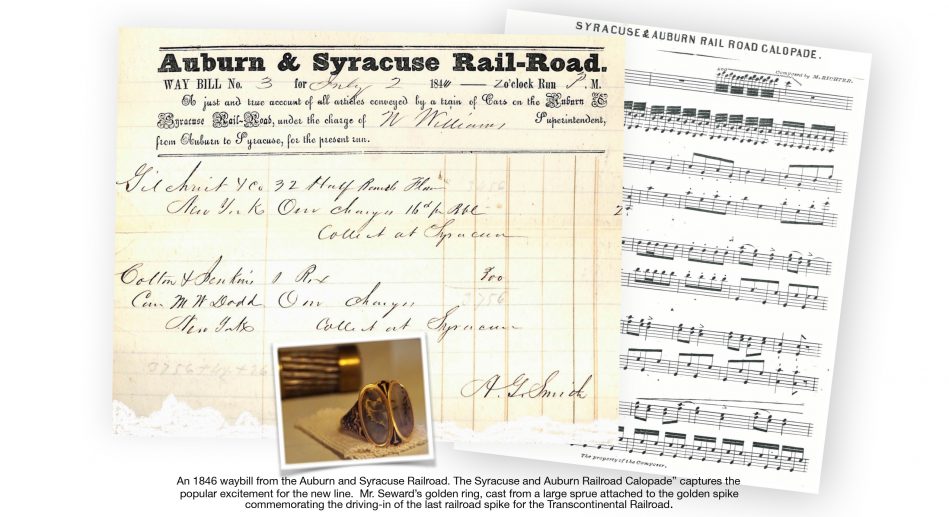 Guest writer Jeff Ludwig wrote the following article about the historic Auburn and Syracuse Railroad, which began operating in 1839.

In late morning on June 4th, 1839, New York Governor William Seward left his home in Auburn to board the 10.5 ton locomotive, the “Syracuse,” for the inaugural ride on the new steam-powered service of the Auburn and Syracuse Railroad. The trip must have seemed a dream come true for the Governor and his 200 fellow passengers. It marked the culmination of a five year effort to link the two fast-growing neighboring settlements. “The meeting of the villages,” Seward recorded, “was a subject for mutual rejoicing, and justly, for trade and intercourse between them then sprang up.” A brass band greeted the Governor’s train when it arrived in Syracuse; after a banquet and party, Seward favored the crowd with a speech of glad tidings on the joining of Auburn and Syracuse.

Seward spent a career in politics—ascending to U.S. Senator and Secretary of State—championing the growth of railroads. But the Auburn and Syracuse line was special to him. Seeing it come to fruition was an accomplishment that nearly defied belief, with some early critics calling the venture a folly. The 26 miles of track in Cayuga and Onondaga counties had to cut through dense terrain, steep escalation, and over Nine Mile Creek. It persevered through national financial panic, chronic funding shortages, and other setbacks.

The end result was a technological marvel. Travel time between Syracuse and Auburn was henceforth reduced to less than an hour. With three engines on the line, service was reliable and fares affordable. Freight capacity encouraged a healthy increase in commerce while passenger cars eased casual travel. Although the Auburn and Syracuse line would cease to exist when it was consolidated in 1850 (eventually joining the New York Central Railroad), the bonds between the two cities remained strong.

Jeff Ludwig is the Director of Education at the Seward House Museum in Auburn, NY. Visit Seward’s golden ring and other artifacts at the Museum. www.sewardhouse.org