The Life and Times of a Canal Boat Cook 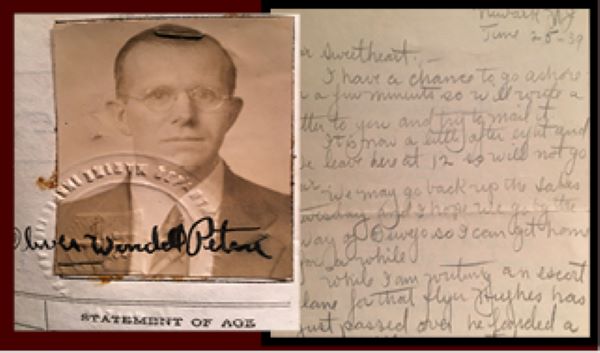 Oliver Wendell Petrie was born into a large family on November 18, 1899 in Oswego, New York. His mother was an avid reader and named her son after Oliver Wendell Holmes, whom she had evidently been reading during her pregnancy. Not much is known of Oliver’s childhood other than that his father, an alcoholic, left the family when Oliver was young and that he consequently had to drop out of high school in order to support himself and his family. He did remain an eager learner all his life, and he was even in the process of writing a history of his church, Oswego’s Church of the Evangelist, when he passed away. His father’s departure had another important impact on his life as well, as Oliver was a devoted teetotaller, refraining from alcohol, all his life.

In 1929, he married fellow Oswegian, Helen Campney, who like Oliver had left school early to get a job supporting her family, working in a woolen mill. Together they had three children, Robert (1932), Phillis (1936), and Lois (1942), who I was lucky enough to speak with. Oliver’s letters, Lois’s recollections, and Oliver’s actions in life all show a deep love for his family, in which he seems to have instilled a similar love for learning, as many of his children and grandchildren would become involved in the education field.

Working as a cook on the oil tanker Empire State

It’s unknown how Petrie ended up learning how to cook or how he ended up on board the oil tanker Empire State as the boat’s cook. Nevertheless, he was hired by the Federal Motorship Corporation and joined the International Brotherhood of Boilermakers, Iron Ship Builders, Blacksmiths, Forgers and Helpers on July 14, 1937 at the age of 37. His first voyage on the Empire State travelling between Chicago and New York City via the modern Erie and Oswego Canals, started on his 38th birthday, November 18, 1937. Thanks to donations by Oliver’s family, the Museum archives contain a number of documents from his voyages. Petrie’s letters, discharge book, personal recipe book and other items offer an interesting look at life on board a Barge Canal boat.

On board the Empire State, Oliver served the crew of 6-7 men a variety of meals, specializing in traditional soups and stews, but also knew a few recipes for more exotic ethnic cuisines, such as chile con carne, Hungarian goulash, and chop suey. All of these meals were prepared using ingredients purchased in New York City, illustrating the availability of relatively new food preservation techniques, such as canning and refrigeration. According to Oliver’s letters, he believed he was a much better cook on board than he was at home. Lois recalled him serving excellent meals on Sundays during her childhood, the only time he would regularly cook at home.

Petrie helped with small tasks and chores on board the ship and spent much of his time reading. Frequently his brother, Fletcher, who owned a market in Oswego, would meet him at the Minetto locks to give him books. He also took the passage through Oswego as an opportunity to see the rest of his family. He spent a fair amount of time observing the landscapes and scenes he passed by on his journeys, with his favorite location on the entire Chicago to New York passage being West Point on the Hudson River. Oliver’s June 1939 description of the home of the United States Military Academy provides a unique perspective into the country’s military preparations as the world marched towards war.

Other sights of note in Oliver’s letters include the 1939 World’s Fair in New York and Howard Hughes’ seaplane landing right in front of his boat. These letters, as well as Lois’ recollections, provide a number of humorous anecdotes, most notably the story of Oliver’s stove breaking and his captain’s creative solution of pushing it overboard to get the company to purchase a new one. Oliver, as the teetotaller of the crew, also had the important duty of rounding up the rest of his crew mates, who had far less scrupulous morals, when their time in port was up.

Oliver spent a year and a half on the canals and Great Lakes as a cook, mostly on board the Empire State, though his final voyage was aboard the tugboat Sampson. He worked the canals until the summer of 1939, when his company asked him to work overseas. With his letters home already showing a deep homesickness, Oliver was unwilling to leave his family for such a long voyage and he left the canals for good following the completion of his voyage aboard the Sampson.

Life after the canals

Following his time on the canals, Oliver worked in a few Oswego factories before settling in at the Columbia Mills, where he worked for 30 years. He also cultivated 2.5 acres of gladiolas, being Oswego’s primary supplier of the flower for many years. In addition to these money making ventures, Oliver was deeply involved in his local Episcopal church, singing bass in the choir while Helen accompanied them on piano, and serving as a vestryman.

Despite his albeit brief involvement in the transportation industry and varied onshore interests, neither Oliver nor Helen ever learned how to drive a car, taking taxis and buses when necessary. It seems Oliver made a relatively clean break from his days as a canaller, rarely talking about his time on the water or visiting the canal that still runs through his hometown. Lois did remember visiting the Minetto locks with him, where Fletcher had delivered books years before.

Sadly, Oliver Petrie passed away from a stroke in 1967, leaving behind a bright legacy, in both the enlightening artifacts that are now preserved in the Erie Canal Museum and, more importantly, in the wonderful family that he helped create, many of whom still live around the Oswego area.