Join us monthly for our engaging Lunchtime Lecture series to learn about different facets of the Erie Canal!  Explore this page for information on upcoming talks and links to watch past programs.

Patrick Reynolds, Director of Public Programs at the Oneida County History Center, will discuss Jesse Williams and the history of modern cheese making that begin in the 19-century Canal Corridor. Williams founded the first cheese factory in America at “Highland Mills” north of Rome,  and was heralded by John H. Kraft of Kraft Foods to have, “exemplified the spirit which has made the dairy industry the largest agricultural industry in America.”

Derrick Pratt, Talking Turkey: One Receipt and What It Can Tell Us Today
November 18 at 12:00 PM

Join Erie Canal Museum Educator Derrick Pratt for the final Lunchtime Lecture of the yearlong Erie Eats Foodways Project. Delve into the myriad of historical tales that can be extracted from just one receipt for a “turkey wild” from 1856. How can this single piece of paper provide a common link between the Erie Canal, Wells-Fargo, and Thanksgiving, along with several other topics? You’ll have to join us to find out!

We welcome people of all backgrounds and various accessibility needs. Digital presentations will be offered on Zoom with closed captions.

Join on Dr. Norman Dann on Thursday, September 16 at 12 PM EDT for this Lunchtime Lecture as he discusses the life of Elizabeth Smith Miller.  As Gerrit and Ann Smith’s daughter, Elizabeth Smith Miller became active in the women’s rights movement through the issues of dress reform and woman suffrage. Her life story covers the era during which women transitioned from being passive domestic servants to assertive human rights activists.  This event is hybrid, so you can choose to join us in-person at the Museum or virtually via Zoom. Registration for this event is FREE for Museum Members and $5 for the general public.

Interim Curator Derrick Pratt presented on the Museum’s new temporary exhibit Erie Eats, looking at the broad and diverse history of food and drinks along the Erie Canal.

Hidden in Plain Sight: Exploring the Unrecognized Role of the Canal in Irrigating Western New York
March 17 at 12:00 PM

Dr. Stephen Shaw of SUNY ESF explored how farms and others currently use water from the canal as well as plans to expand irrigation to support the region’s agricultural economy and to provide some resiliency to the increased occurrence of drought. Click here to watch the recording.

Few things are more universal than a need for food.  The 19th century in America brought massive growth of industry, movement of people, and avenues for social uplift. This had a direct impact on the evolution of food production, consumption, and dining practices across geographic and socio-economic lines. At the center of much of this change was the opening and expansion of the Erie Canal and the people who lived and worked on it.  Amanda Massie and Valerie Balint discussed how the technology and ideas that moved along the Erie Canal shaped how Americans ate in the 19th century. They discussed different communities associated with the canal highlighting the diverse people who played a role in supplying American tables.  Click here to watch the recording. 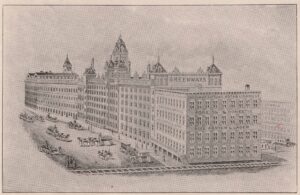 BrewErie Canal: A Short History of Syracuse Breweries
May 27 at 12:00 PM

May’s Lunchtime Lecture featured Bob Searing, Curator of History at the Onondaga Historical Association. Due to the COVID-19 crisis, the program was streamed live on the Museum’s Facebook page. This presentation covered the storied brewing history in the Salt City. The city’s central location on the Erie Canal, the easy access to fresh water and ice, and the ease of transportation, coupled with the significant levels of immigration of Irish and German immigrants in the 19th century, made Syracuse a major brewing center in the days before Prohibition killed off most of the local breweries. The talk covered the major players locally including Greenway’s, Bartels, Haberle, and Moore and Quinn, as well as some of the smaller, short-lived brands. The talk ended with the renaissance of local brewing, including a discussion of Middle Ages, Empire, Towpath, Eastwood, Talking Cursive, Heritage Hill, and the OHA and Willow Rock’s revival of the beloved Congress Beer in August of 2019. Cheers! Click here to watch the recording.

Don is a writer for Syracuse.com, The Post-Standard and NYUP.com. He has covered the trends and changes in beer, wine, and spirits across Upstate New York since the mid-1990s. He is the author of New York Breweries, 2nd ed. (Stackpole; 2014) and Spirits & Cocktails of Upstate New York (The History Press; 2017). He is currently part of a team working on a complete history of beer and brewing in New York state for the SUNY Press.

Dr. David Stradling discussed the natural and cultural forces that combined to make New York City the nation’s premiere port and Upstate New York one of the world’s most dynamic regions in the mid-nineteenth century.

This project is dependent upon the generous support from the William G. Pomeroy Foundation, the Erie Canalway National Heritage Corridor and the NYS Canal Corporation, along with support provided by Market NY through I LOVE NY, New York State’s Division of Tourism, as a part of the State’s Regional Economic Development Council initiative.